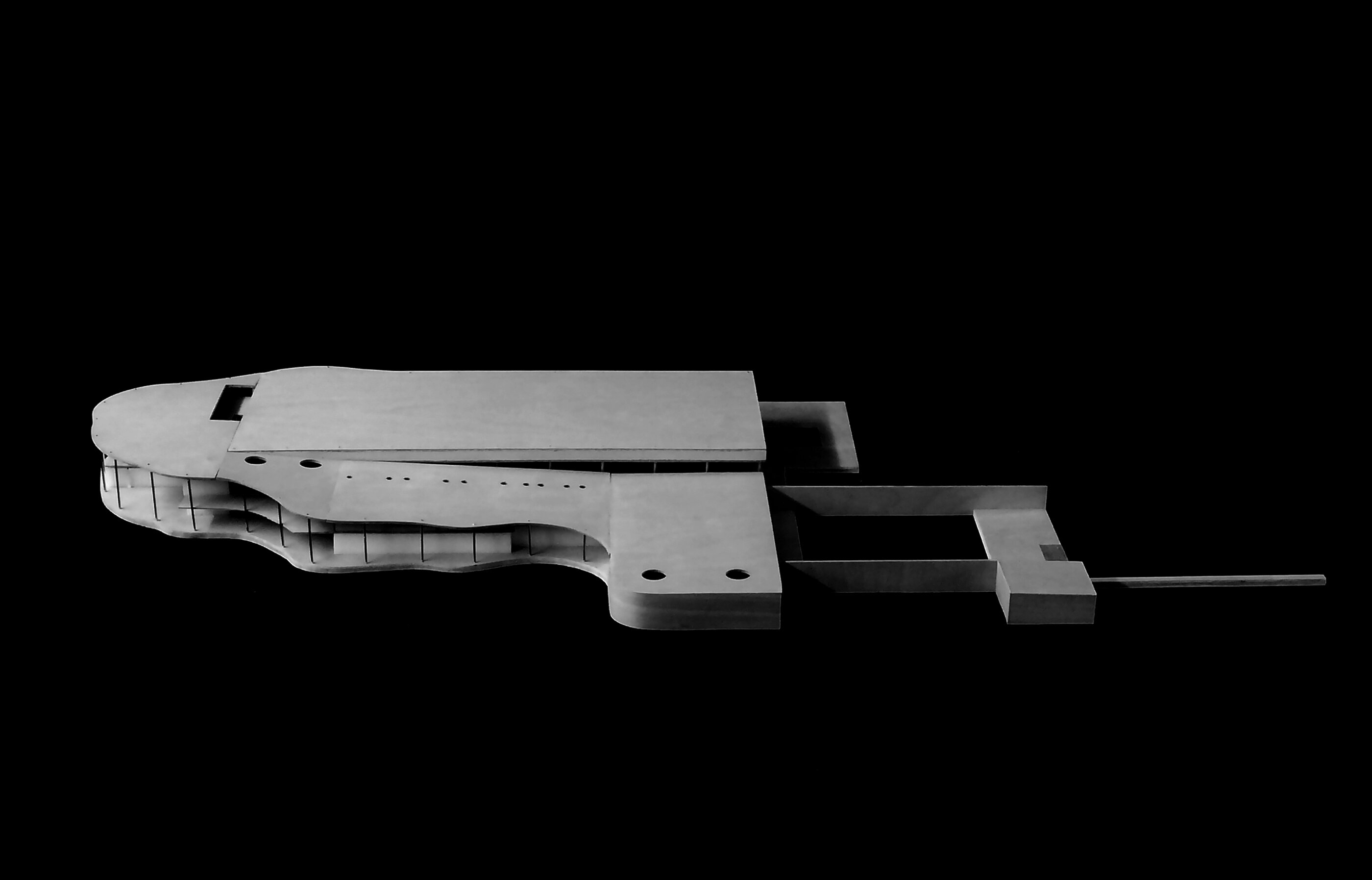 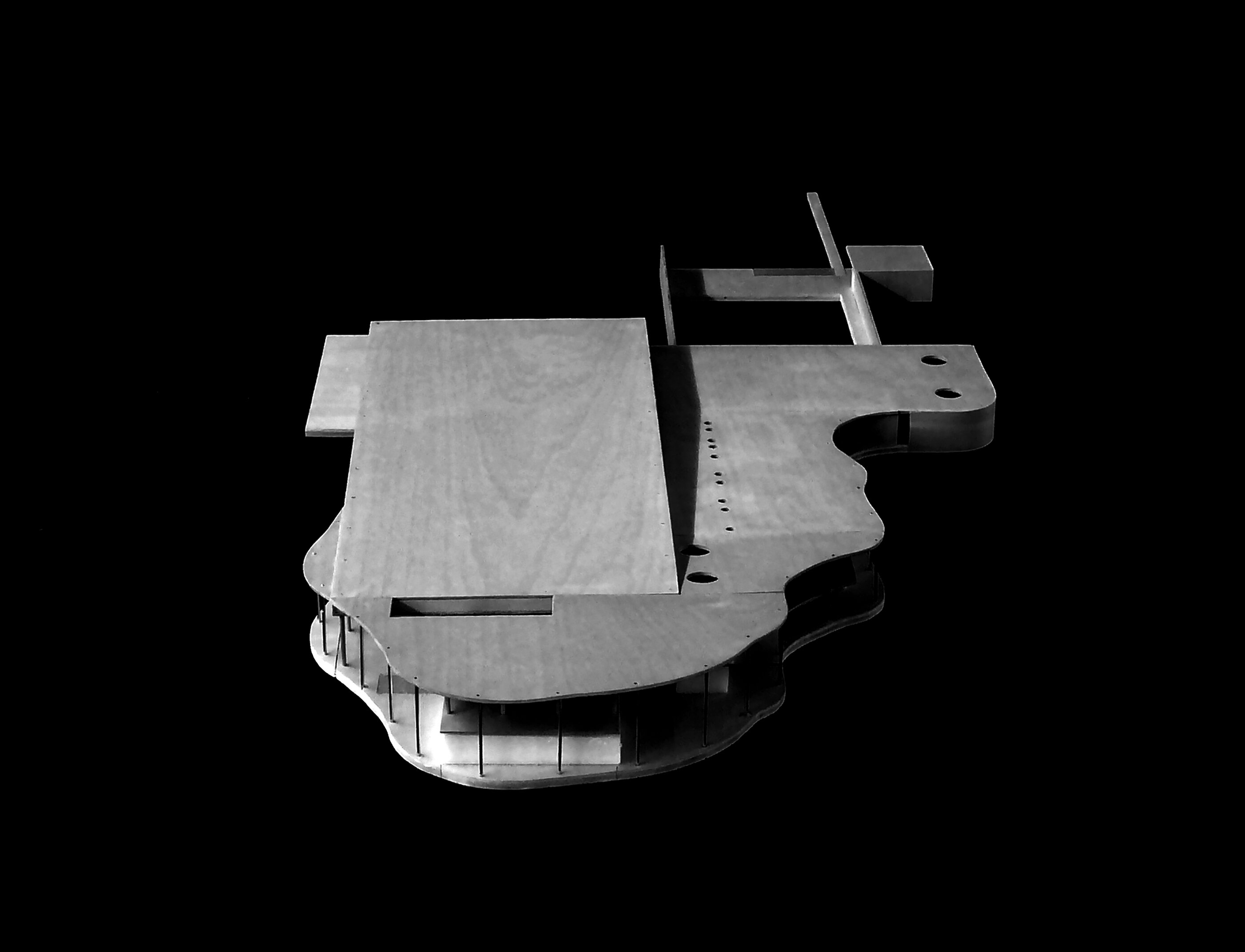 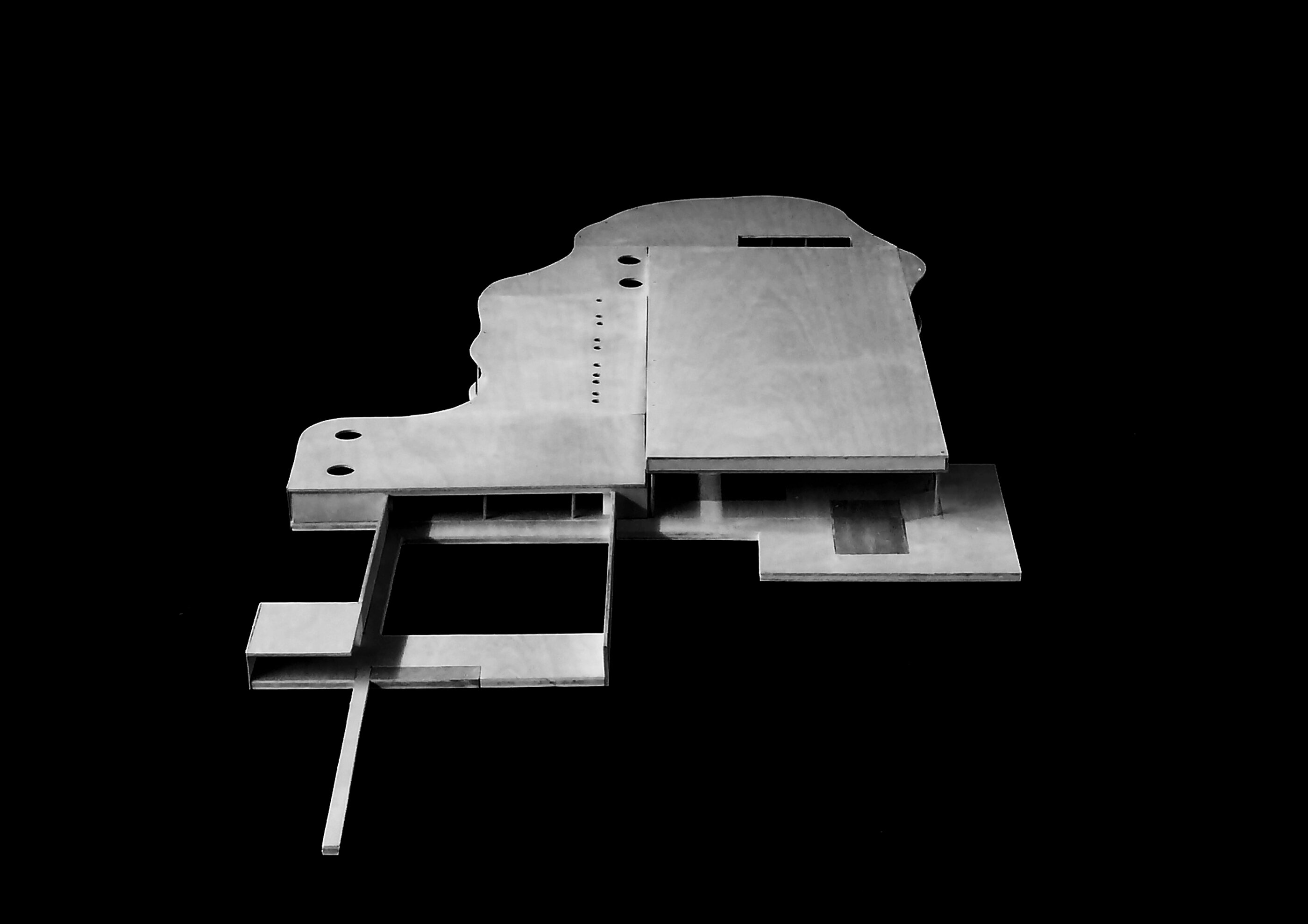 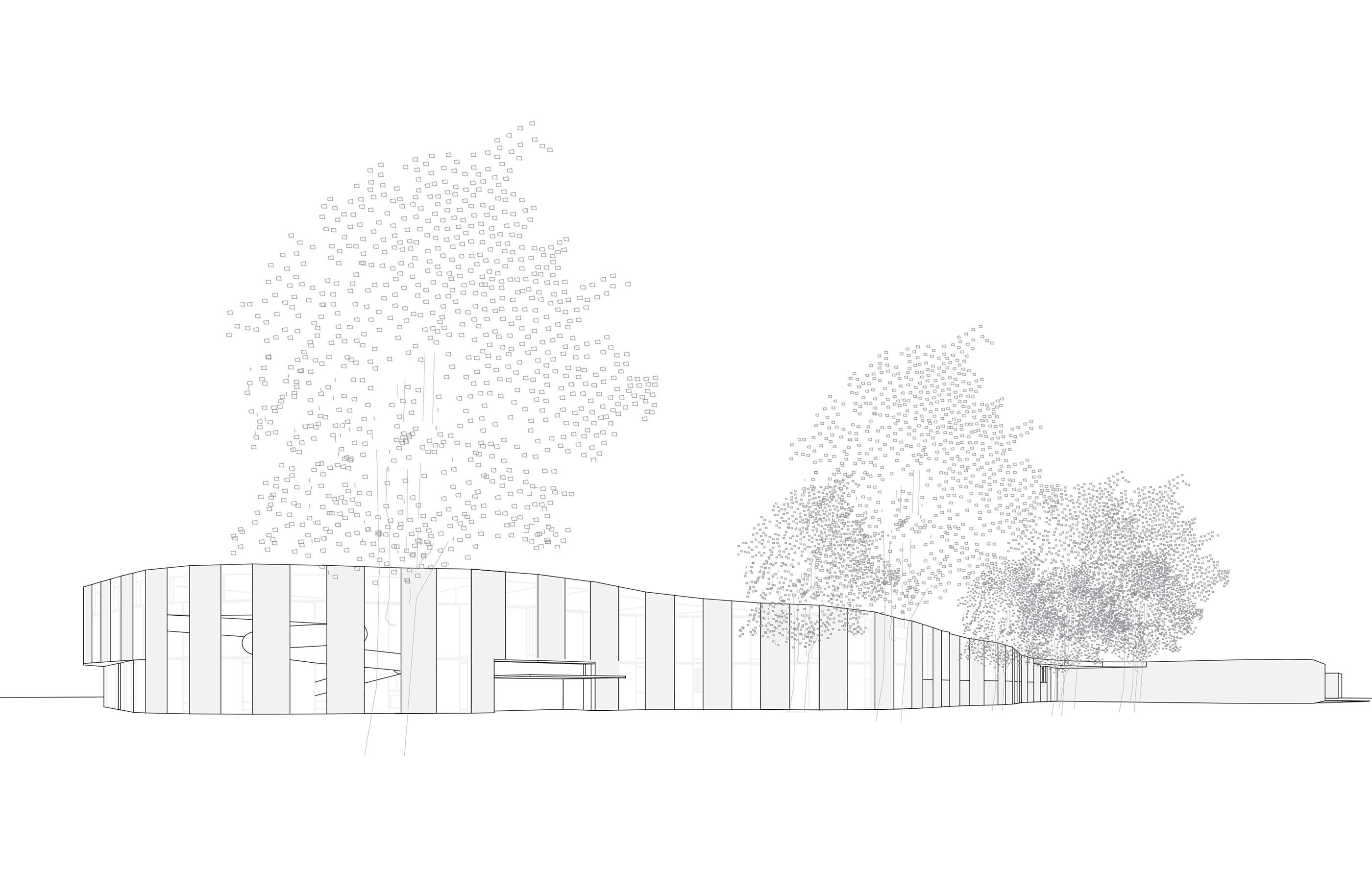 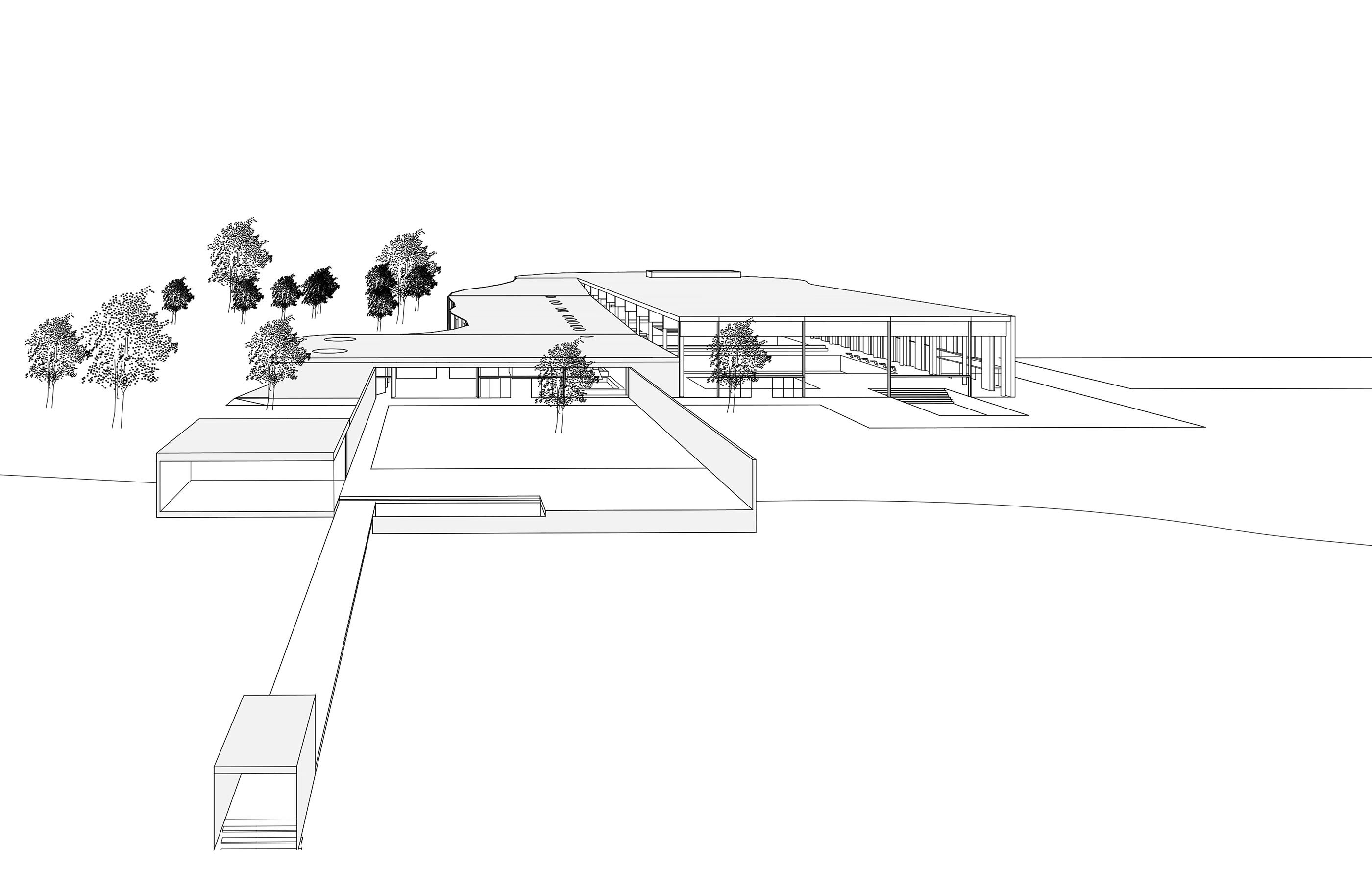 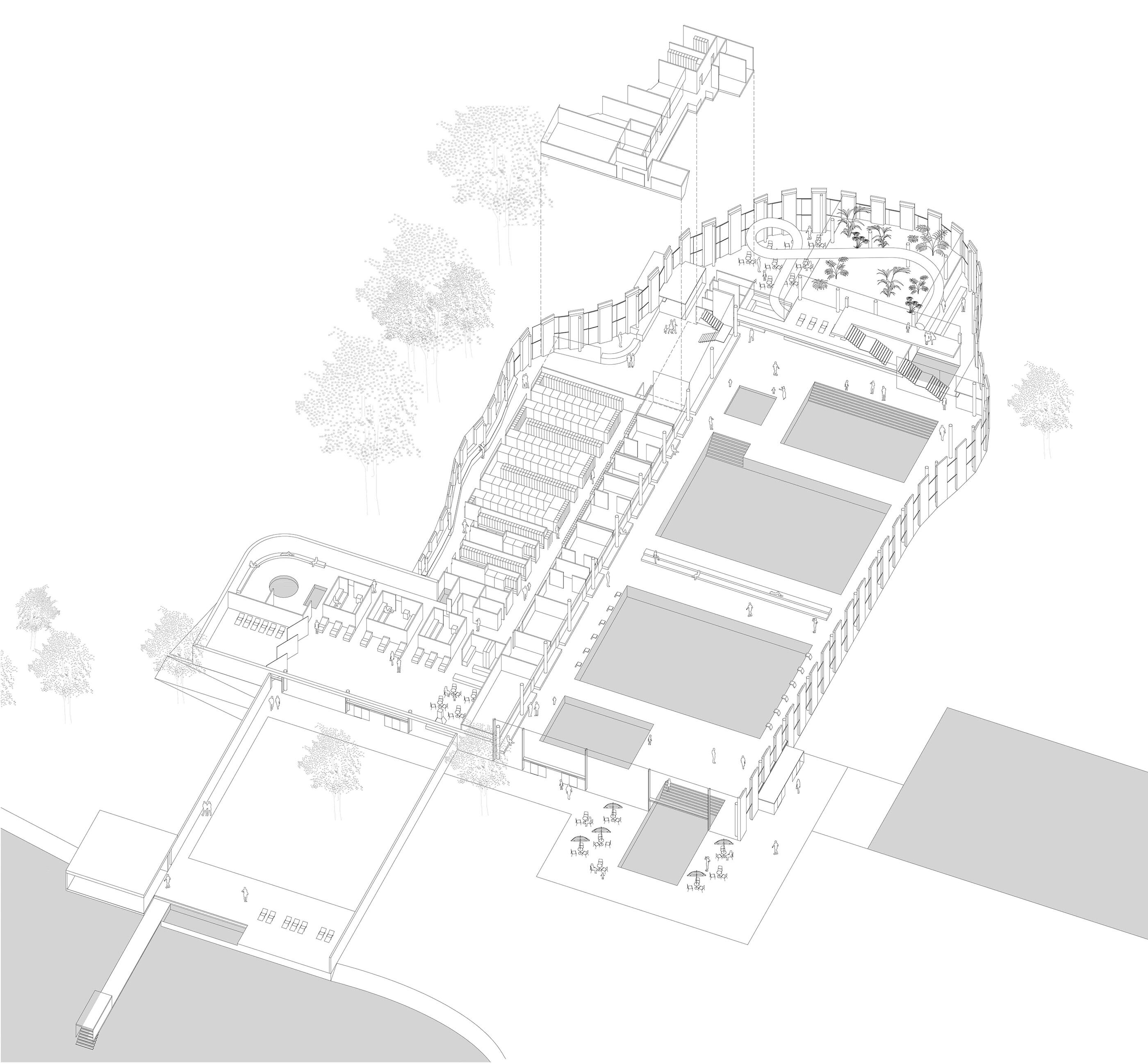 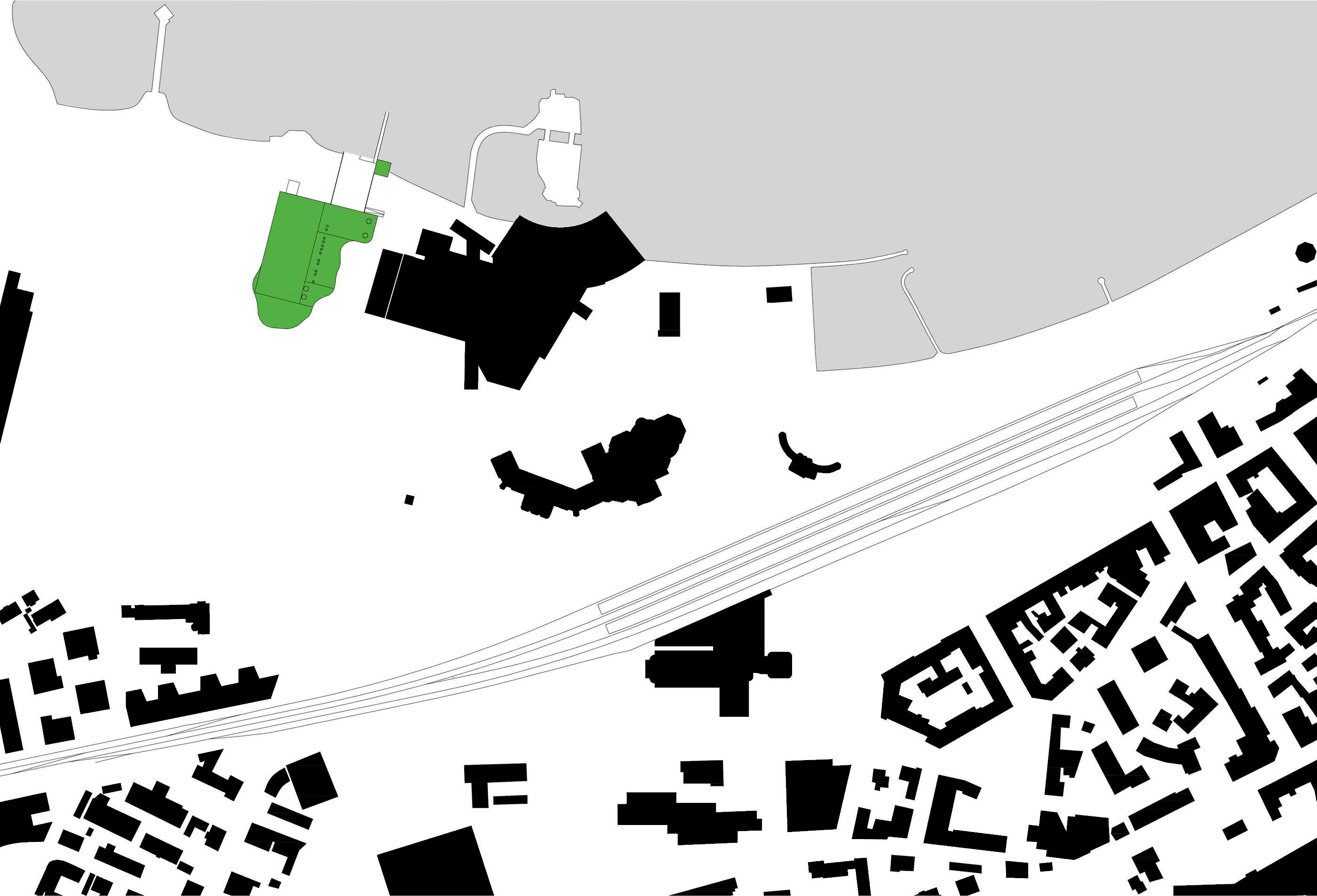 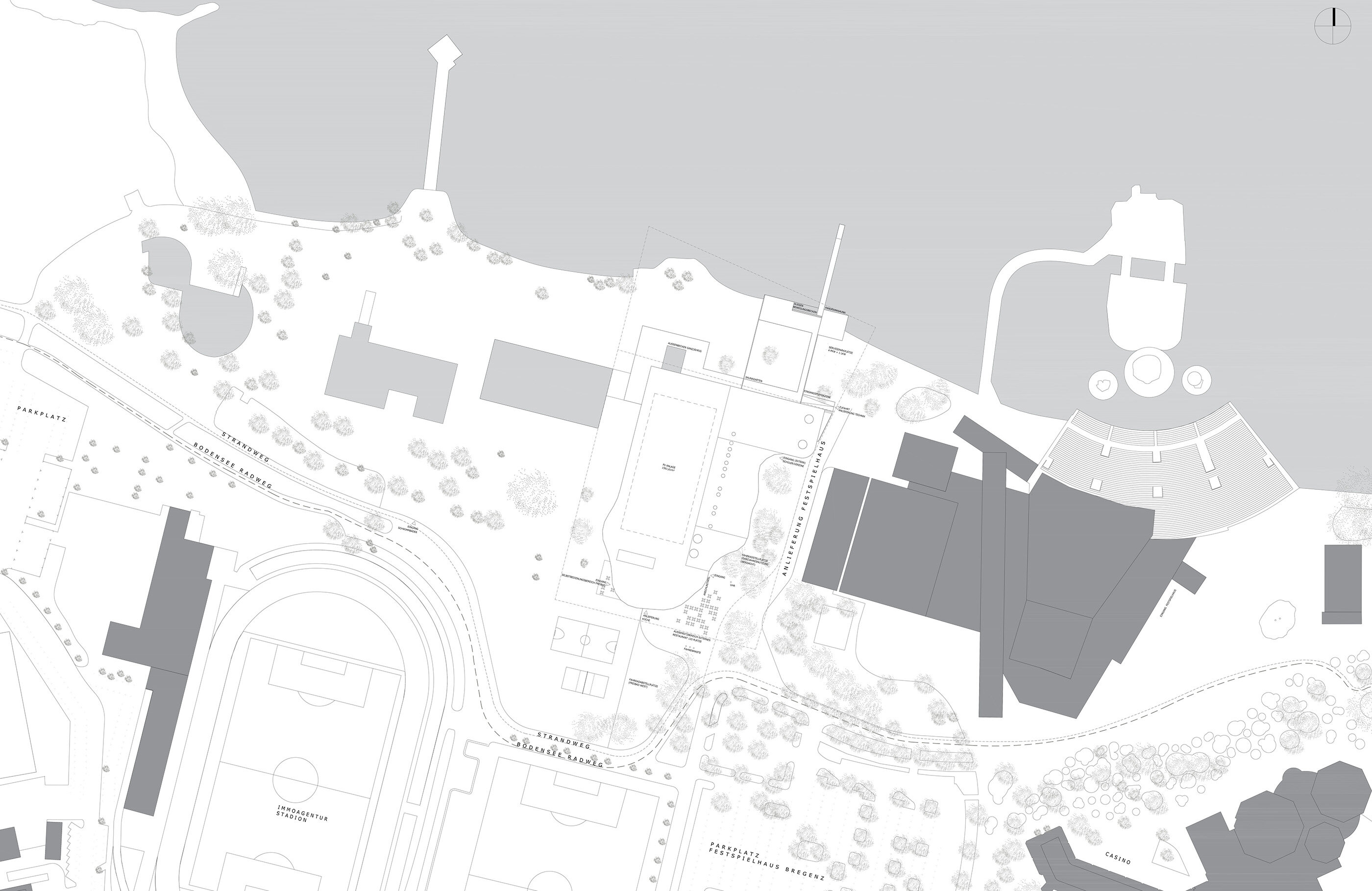 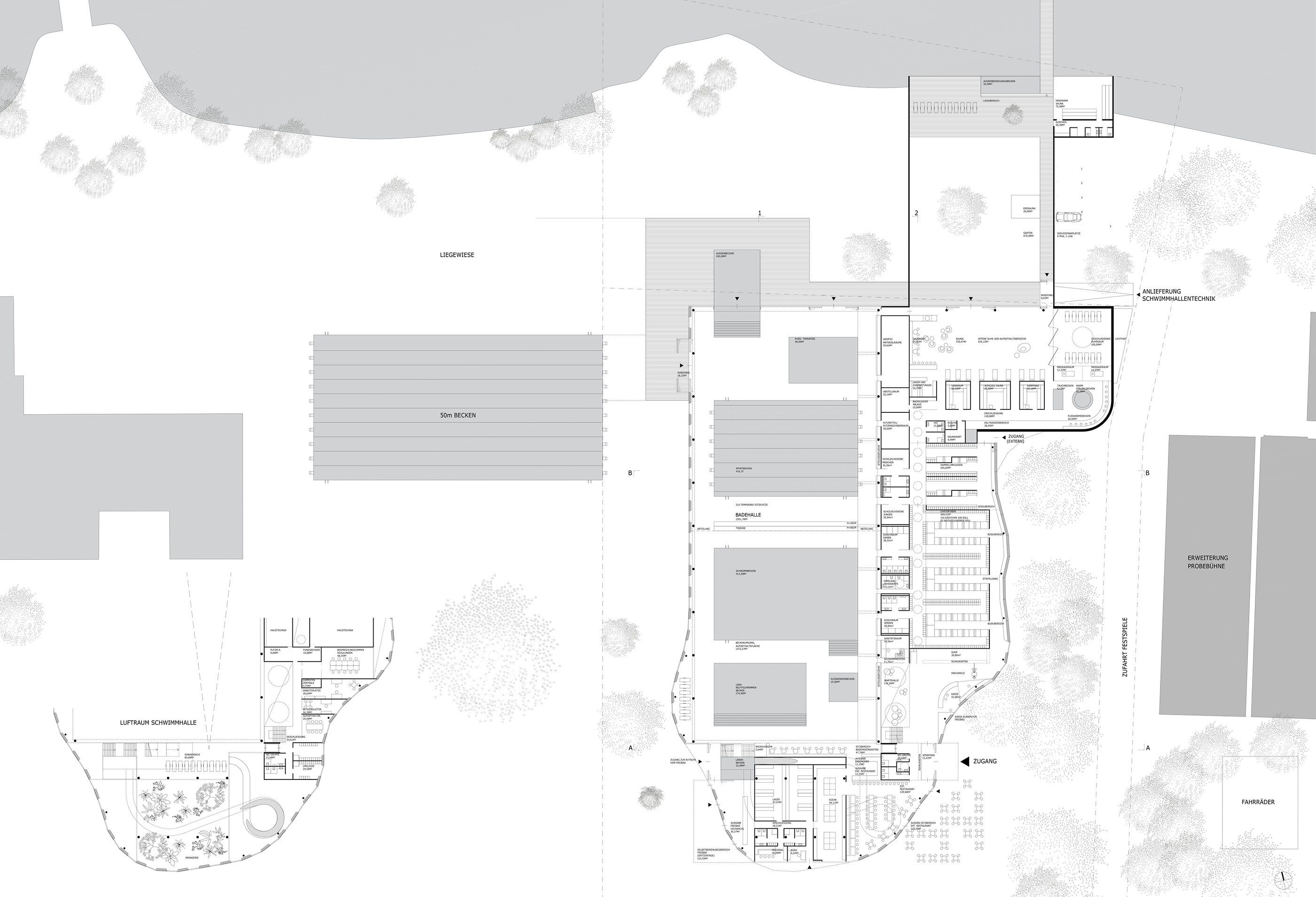 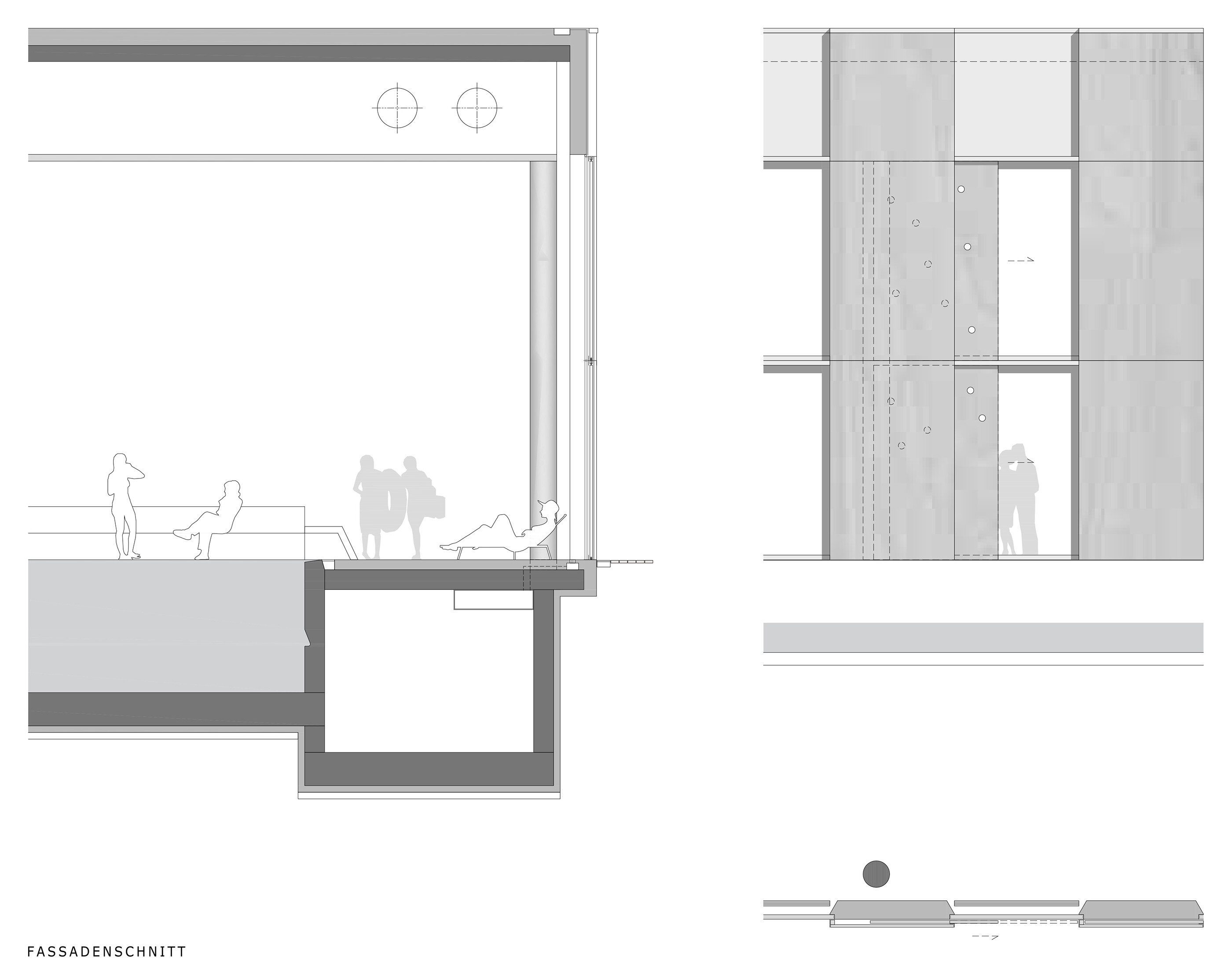 The site for the new indoor swimming pool complex is directly to the west of the deliveries area for the festival building. On the grounds of the lakeside baths the road leading to the lake is lined by some fine mature trees that define and shape space. These trees are preserved as far as possible and are used to form a “buffer” between the large-scale festival complex and the swimming facility.

All the functional rooms are placed alongside the strictly orthogonal indoor swimming pools, on the side facing the rehearsals stage and the car park. The flat swimming pool building, gently modulated by the existing trees, has a haptic, large-scale wooden facade, and forms a strong contrast to the powerful volume of the festival building. The building’s internal functions are enclosed by the building shell in the same way as an instrument case encloses an instrument.

The indoor swimming pools are clearly and simply organised, the pools’ orthogonal geometry is continued outdoors by the short routes used in operating this facility. All the ancillary spaces are arranged organically around this “heart of the building”, moulded in way that takes careful account of the existing trees:

the restaurant at the approach and towards the south, with a slide positioned in the void. The kitchen with a direct deliveries area

slide tower and approach and a special area between the indoor pools and the outdoor facilities to the west.

The changing rooms are to the east, beside the existing trees in front of the rehearsals stage, the sauna faces in the direction of the lake.

The slide is in the interior of the building, in the void to the restaurant and the sunbathing deck. Thanks to its special position – it starts on a gallery that offers a view across the swimming hall and runs through a winter garden beside  the sunbathing deck for the guests and through the restaurant area – it is an unusual, unexpected attraction, both for restaurant guests and for those who take a slide. This striking “sculpture” in one end of the building can be seen already when you are in the car park (the slides that Carsten Höller has sculpturally installed in various art institutions are used as a reference).

An external wall that is half closed towards the south, west and east can be shut entirely by means of perforated sliding shutters (providing sun protection on the one hand, preventing cooling at night on the other). The outline of the free-form building has a clear section only in the direction of the lake: a large panoramic area of glazing for the indoor swimming pool and the sauna area. The flat ceiling of the hall (with acoustic noise absorption elements) relates to the level horizontal of the lake surface.

The sauna is a “hortus conclusus” with an area of glazing facing the lake and, in contrast, intimate, closed pool and rest areas that are lit solely by rooflights.

The entire swimming facility with access, changing rooms, restaurant, indoor pools and sauna is organised on a single level. On the upper floor, above the kitchen and facing south, the “sunbathing deck”, beside the stairs leading up to the slide, has view of the lake and across the indoor pool. The administration offices are also on the upper floor, directly above the entrance hall and have a view into the swimming pool hall.

The basement area has direct access by ramp for deliveries and consists of just the swimming pool hall, the changing room area, and the sauna. The ventilation plant is installed in the suspended ceiling to the changing rooms (with direct access from the administration area) and in the roof structure of the swimming pool hall (with photovoltaic plant above).

The beams of the hall structure with the ceiling that rests on them span above the swimming area, between the wall to the changing rooms and the external wall, without intermediate columns. The smaller adjoining rooms are roofed by a monolithic ceiling slab carried on columns that are closer together.