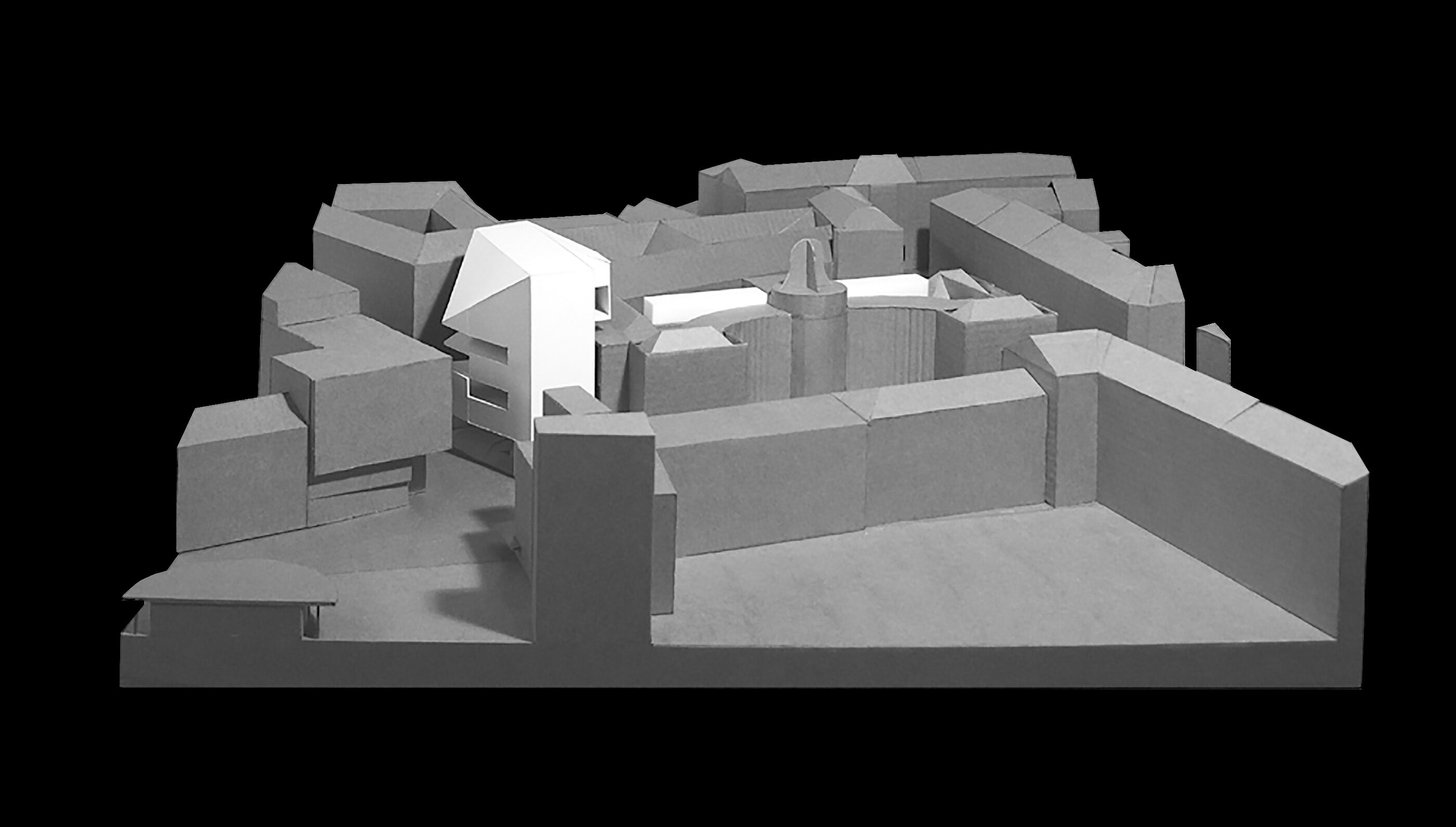 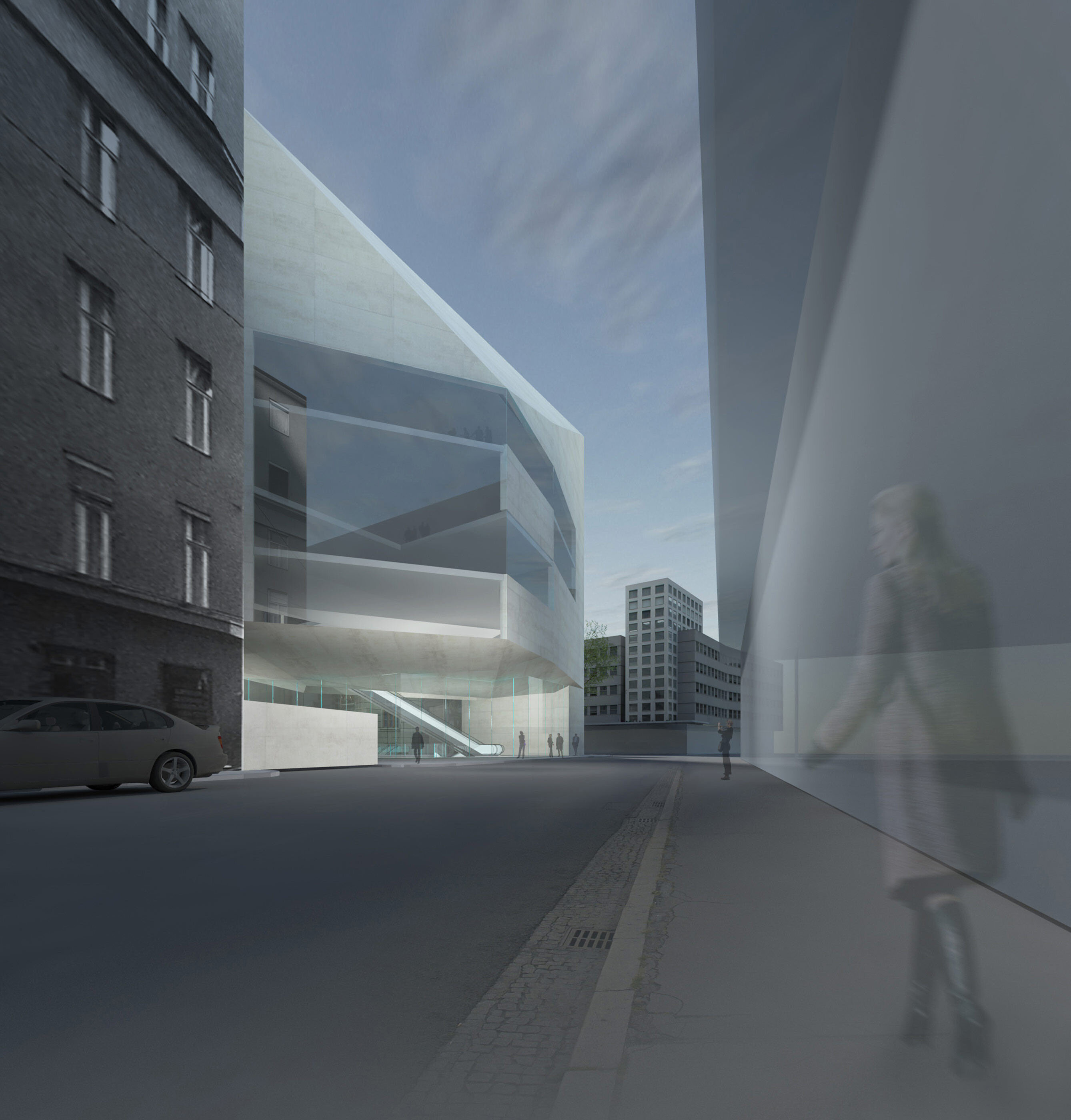 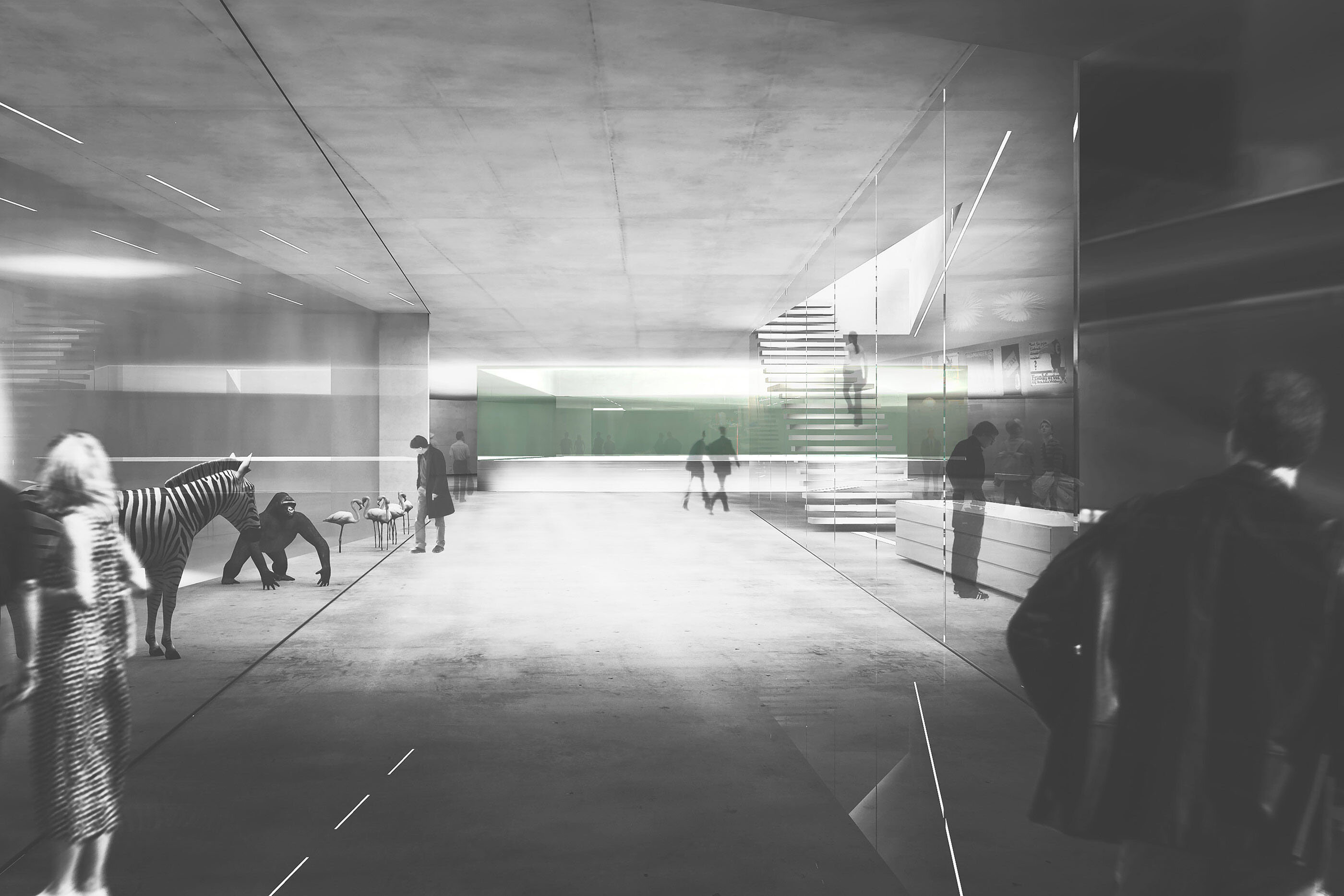 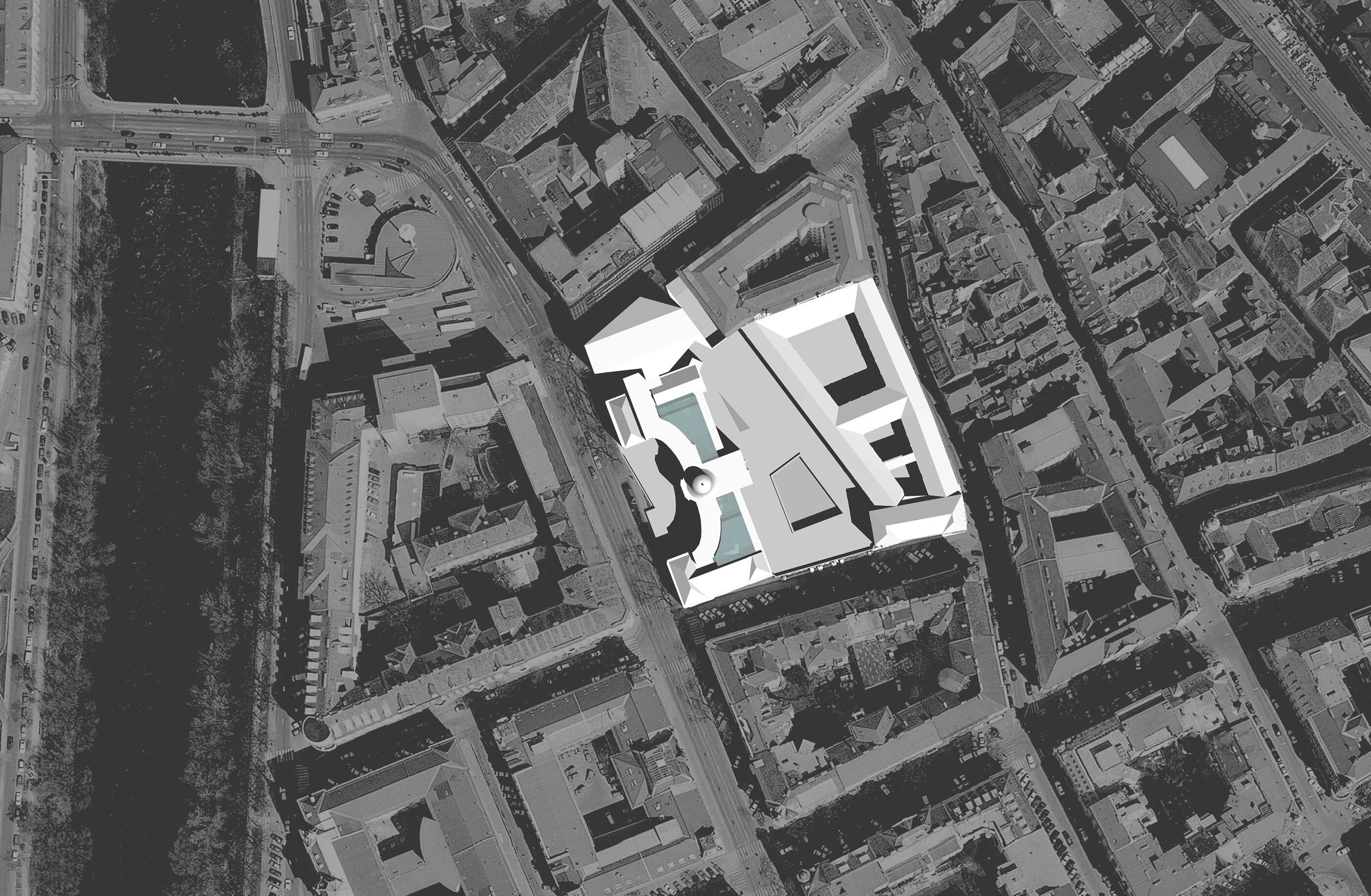 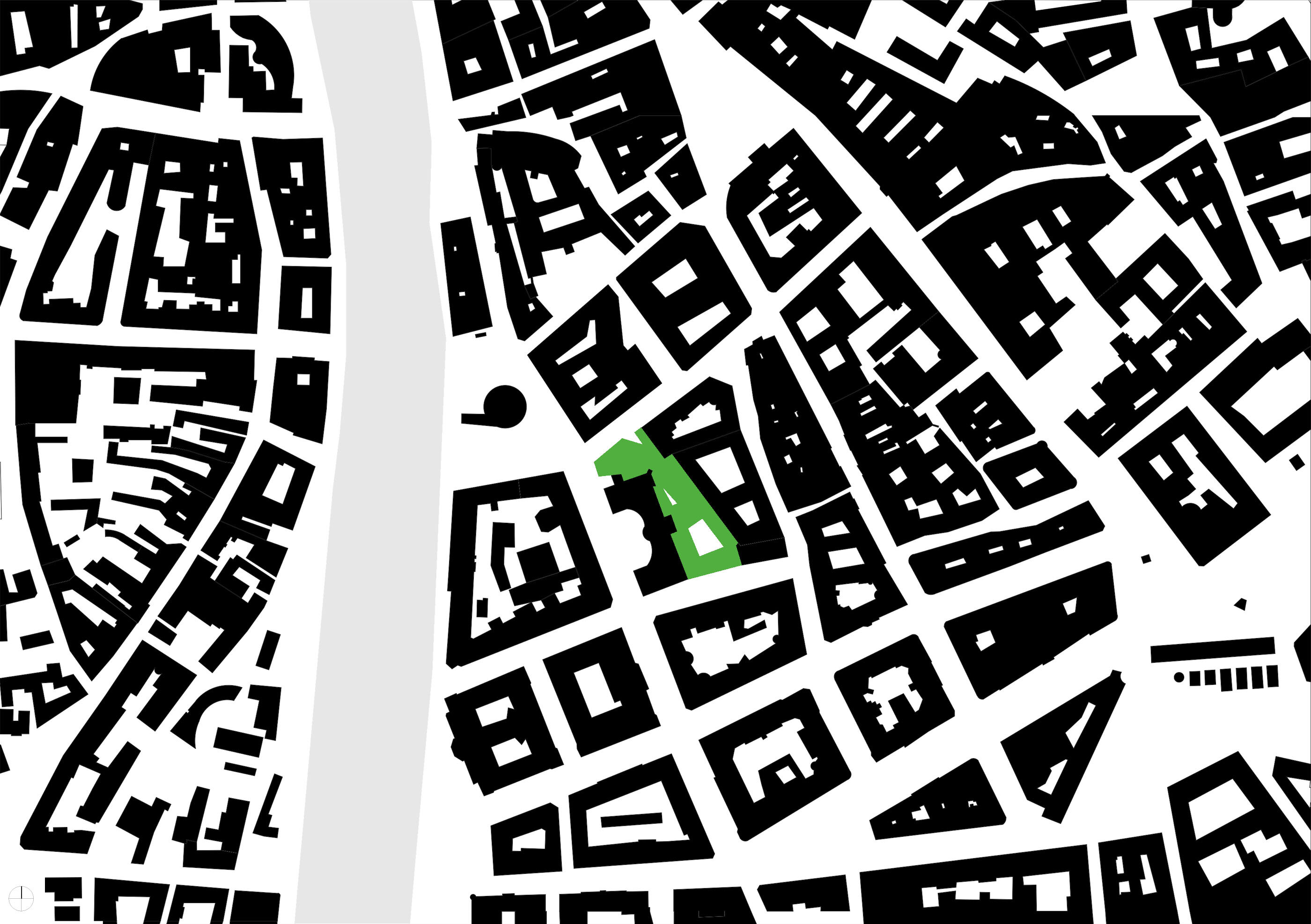 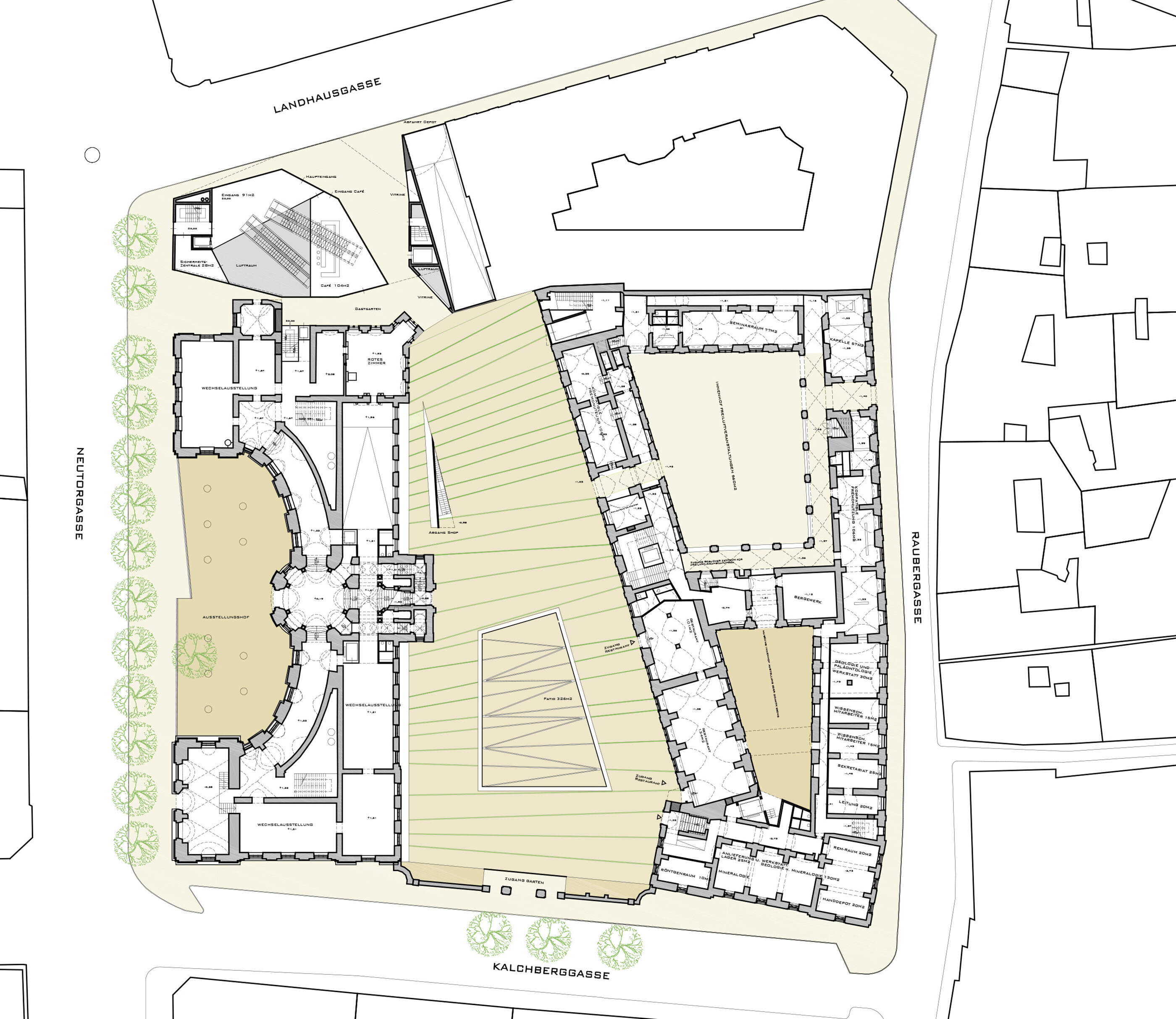 Taking as its starting point the stated aims of the competition authority, this project attempts to formulate the public space around the Joanneum in a new way and to make the “urban space in the museum“ an important concept of the design. Naturally, this does not mean depriving the three areas – natural sciences, art history, state library – of their autonomy, which is derived from the history of the Joanneum. On the contrary: the project aims to upgrade it through the possibilities it offers for spatial connections and exchange.

1. Welcome. The Joanneum opens its doors

At ground floor level the Joanneum remains accessible and permeable for pedestrians. The Renaissancehof becomes part of an internal route that leads across Herrengasse, the Rathaushof to the River Mur. The former botanical gardens can always be entered from Kalchberggasse and offers a way through to Landhausgasse. These open routes are of great importance in creating a public awareness of the Joanneum and in addition to their function for the museum they offer possibilities for the city. A large sunken courtyard with a thematic botanical concept and a folded roof above the museum shop, which is accessed via a secondary staircase, indicate that the visitor centre lies below.

2. Missing link. The new main access to the Joanneum

It is proposed to erect a new entrance building on Landhausgasse with a volume of urban significance, which provides access to the visitor centre, to the Landesbibliothek (State Library) and to a café at ground floor level. From a shared platform, escalators bring one down to the new visitor centre or to the State Library. The new building is made of white concrete with a lining determined by its function (acoustics etc.), there are large openings for the library, the reading rooms, and the administration, while in the library storage area only the restoration workshops are lit. The reading rooms and important areas such as the specialist library and administration are connected by two storey spaces. The visitor centre in the basement is therefore a public space that is freely accessible during opening times and is also seen as a connecting element between two of the existing buildings of the Joanneum. The aim is to articulate functional sequences, logistical aspects and other reflections about a “place for exhibitions, education and research” in a manner that never questions the dignity of these two buildings despite their stylistic differences, particularly because they are identity-shaping parts of the overall concept of the Joanneum.

3. Reorganised. The tour of the museum is completed

The natural sciences area on Raubergasse is extended by adding the building of the former State Library in which the offices and science laboratories are located. This makes potential museum spaces available and produces a logical tour. The rooms on the ground floor, apart from the Bergwerk (Mining) and a seminar area in the northern part, are not used for the museum. The Renaissance courtyard can be used for public functions and events. As already mentioned, it is publicly accessible and allows the visitor centre to be reached quickly, but without making the historical entrance, with the inscription “Joanneum” above the doorway, obsolete. For the few left-over areas in the interior of the building a compatible use by a third party is suggested. The smaller internal courtyard, which at ground floor level continues as far as the former State Library, can be used flexibly as a closed, not publicly accessible space for museum or museum education purposes and can be reached from the visitor centre (access to Bergwerk) or from the main staircase. The former ground floor library rooms in the western Renaissance building could house a restaurant run by an external operator that would face onto the garden and which, alongside the café at the main entrance, would enrich the garden and bring additional life to it. On the first and second floors the rooms for temporary exhibition are located, as called for in the schedule of accommodation, while the permanent exhibition is in the southern part of the second floor. A new two-storey bridge building connects the southern areas at the rear, creating a round tour. For the attic level no museum of administration functions are proposed, instead technical services related building climate control could be considered here, which could be more precisely articulated once a detailed concept has been formulated and taking into account the requirements of the conservationists. In this way massive interventions in the historical roof could be avoided. In general, for the natural sciences area on Raubergasse and for the former State Library a conservational restoration is suggested – with all that this involves: a survey of surfaces, interpretations etc. Here a dialectical approach to the historical building fabric in the sense of a reinterpretation for museum purposes should not be taken, instead an adaptation should be made that shows respect for the value of age. This contemporary aspect can be introduced by temporary exhibitions, which are reversible.

In contrast, the reflections on the cultural studies area can be quite different. The neo-Baroque building was conceived from the very start as a “container for exhibitions” in the sense of Semper’s theory of textiles. Over decades different kinds of exhibitions and functions have been housed there and, on this account, new parts, insertions etc have been repeatedly added. It therefore seems legitimate to remove all of this and to recreate an original state of the exhibition building – but without reconstructing it. A few examples: reinterpreting the stairs at the lightwells; creating a contemporary connection between the visitor centre and the neo-Baroque staircase hall:  proposing infrastructures that allow a variety of uses for an “exhibition container”. “Neutrality“ in the sense of a contemporary exhibition building certainly, but not at any price: if the existing surfaces, floor coverings and other parts are found suitable for a flexible new use, then they should be preserved; conversely, however, no obsessive conservationist dialectic and no historically accurate reconstruction at those places where a contemporary self-confidence is appropriate for new infrastructures. After all, here the main approach is detached, to serve in future as the approach to a fenced exhibition garden, which does not exclude the possibility that when spaces are rented out – as mentioned in the exhibition concept – this approach can continue to  be used through the new garden doorway. The sound recording and photography areas are located on the second floor as well as the administration. Two new elements on the attic serve as additionally needed office space and also house the air-conditioning infrastructures

The former botanical gardens that connects the buildings is understood as a green courtyard on several levels. Of the existing shrubs those in a narrow bed along the garden wall to Kalchberggasse can be retained. The surfaces are designed to be accessible and permeable to water: the gravel surface is broken up by narrow joints made from Stainzer slabs, these joints are determined by the façade systems of the two opposite buildings and connect them. The 8 cm-wide joints are planted with Leptinella, Asplenium viride, Oenothera etc. A feeling of the wildness of nature is created in precisely defined bands. The sunken patio is conceived as a botanical intarsia, as an evergreen fern garden. At ground floor level a parapet to lean against is envisaged that allows one to look down from above.

The patio is to be accessible and is intended to have an educational function by showing the relationships between plant families. Through the animated topography (“Die bucklige Welt“) the individual flower beds are divided into those that are in the sun and those in semi-shade. The paths connect the entrances on all sides, hellebores, hazelwort, and saxifrage accompany the areas of planting. The monument to mineralogist Friedrich Mohs could remain where it is but could also be moved to the planned sculpture garden on Neutorgasse.